Kill Tobacco Before It Kills You
NO TOBACCO DAY 31ST MAY 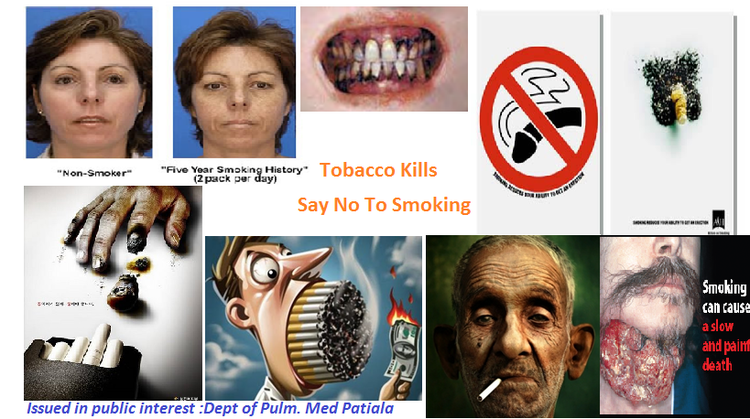 Tobacco use is one of the leading preventable causes of death. The global tobacco epidemic kills nearly 6 million people each year, of which more than 600,000 are people exposed to second-hand smoke.

Under guidance of Dr.AP Kansal TB Hospital , Patiala has been made smoke free in past three years with his constant efforts and care.

Cigarette smoke contains over 4,000 chemicals, including 43 known cancer-causing (carcinogenic) compounds and 400 other toxins. These include nicotine, tar, and carbon monoxide, as well as formaldehyde, ammonia, hydrogen cyanide, arsenic, and DDT. Nicotine is highly addictive. Smoke containing nicotine is inhaled into the lungs, and the nicotine reaches your brain in just six seconds.

As a cigarette is smoked, the amount of tar inhaled into the lungs increases, and the last puff contains more than twice as much tar as the first puff. Carbon monoxide makes it harder for red blood cells to carry oxygen throughout the body. Tar is a mixture of substances that together form a sticky mass in the lungs.

Smoking has effects from head to toe! Starting with head ,
Hair :Smoking effects can be felt on your hair. You hair becomes smelly and stained due to instant smoking effects. Slow hair growth, thinning and graying of hair is also believed to be a direct smoking effect. Your hair will look and feel lifeless and dull. Brain :Blood thickening and clotting are also serious smoking effects and smokers are 1.5 times more likely to have stroke as compared to non-smokers.Nose:Effects on your nose can rob you of your sense of smell.Mouth:Do you ever wonder why your teeth are so yellow and stained? Do your gums bleed every morning you wake up? Well, it's because of the direct smoking effect on your teeth. Also smoking effects are not limited to the appearance of your teeth but also results in plaque, loose teeth, gum disease and gingivitis.
Throat:All cancers associated with the larynx, oral cavity and esophagus are fatal smoking effects. The less dangerous smoking effects are reduced sense of taste, sore throat and smelly breath. Hand And Legs:  Poor blood circulation which leads to cold fingers, tar stained fingers, peripheral vascular disease and amputation due to gangrene are some of the heart-wrenching smoking effects.
Lung : The most dreaded lung cancer, feeling out of breath, colds and flu, pneumonia, asthma, cough and sputum, tuberculosis, chronic obstructive pulmonary disease, chronic bronchitis and emphysema, are all smoking effects which will more or less make your life hell.
Heart:Long term smoking effects are increase in the blood cholesterol and fibrinogen levels and increase in chances of having a heart attack.Digestive System: effects are heartburn, peptic ulcers, Crohn's disease, gallstones and stomach cancer. Wrinkles, capillaries and premature ageing and scarring are few smoking effects on skin.

Stopping smoking is the greatest single step a person can take to improve their health but it is a difficult task. Most people who smoke at least a pack of cigarettes per day have tried to quit at some point in their smoking "career," but unfortunately returned to smoking, mainly because quitting involves combining several strategies and behavioural modifications, it's not just about the nicotine. In fact, smokers create several habits, rituals, and behaviours that they take for granted and fail to replace when trying to quit. That is why quitting cold turkey without help sends 95% of ex-smokers back to cigarettes within 6 months.

Most quitting methods, like the pills, the patch, and nicotine gum address only nicotine, but behaviour modification is the only way to ensure permanent cessation.And finally, stopping smoking works. Both for those who already smoke, and for those who will start to smoke in the future, what matters is not only the hazards of smoking but also the benefits of stopping.Even in early middle age (for example, at around age 40) those who stop (before they have lung cancer or some other fatal disease) avoid most of their risk of being killed by tobacco.There is no single quit method that guarantees success. On average it takes 4-5 attempts to give up and there are a number of things that can help willpower nicotine replacement therapy in the form of gum, skin patches or nasal spray, Behavior modification programmes, Alternative therapies such as acupuncture & hypnosis.

TB Hospital Patiala is running Smoking Cessation Programme where present smokers are encouraged to quit smoking and those who already did are helped to maintain it. As we understand Smoking cessation go beyond pharmacotherapy and advertisement gimmicks. Behavioural modification with counselling forms backbone of any cessation programme.

The Theme for this year’s World No Tobacco Day 2012 is “Tobacco Industry Interference”. This theme aims to educate policy-makers, the media and the general public about the tobacco industry's disreputable and harmful tactics

So let us take a pledge on this day that we shall not let the tobacco industry help kill our kin, prevent new smokers and by making those quit, who already do smoking. We must help the govt. by ensuring that the laws are followed by having smoke free public places and making sure that any vendor dispensing tobacco or cigarettes near any educational institute is reported and duly reprimanded. Lets us do our bit to kill tobacco before it kills India. 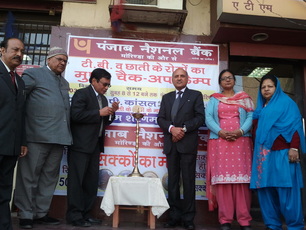 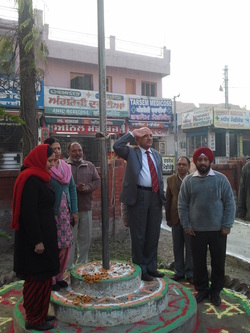 Along with utmost patient care , Hospital celebrated 62nd republic day by hoisting national tricolour. Every year, January 26 is celebrated as Republic Day in India to honour January 26, 1950 when Constitution of India came into existence. The Day is celebrated with great enthusiasm and patriotism all over the country.