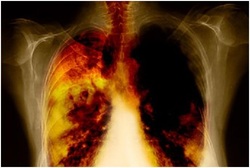 What is lung cancer?
Cancer  of the lung, like all cancers, results from an abnormality in the body's basic unit of life, the cell. Normally, the body maintains a system of checks and balances on cell growth so that cells divide to produce new cells only when new cells are needed. Disruption of this system of checks and balances on cell growth results in an uncontrolled division and proliferation of cells that eventually forms a mass known as a tumor.
Tumors can be benign or malignant; when we speak of "cancer," we are referring to those tumors that are malignant. Benign tumors usually can be removed and do not spread to other parts of the body. Malignant tumors, on the other hand, grow aggressively and invade other tissues of the body, allowing entry of tumor cells into the bloodstream or lymphatic system and then to other sites in the body. This process of spread is termed metastasis; the areas of tumor growth at these distant sites are called metastases. Since lung cancer tends to spread or metastasize very early after it forms, it is a very life-threatening cancer and one of the most difficult cancers to treat. While lung cancer can spread to any organ in the body, certainorgans -- particularly the adrenal glands, liver, brain, andbone -- are the most common sites for lung cancer metastasis.

The lung also is a very common site for metastasis from tumors in other parts of the body. Tumor metastases are made up of the same type of cells as the original (primary) tumor. For example, if prostate cancer spreads via the bloodstream to the lungs, it is metastatic prostate cancer in the lung and is not lung cancer.

The principal function of the lungs is to exchange gases between the air we breathe and the blood. Through the lung, carbon dioxide is removed from the bloodstream and oxygen from inspired air enters the bloodstream. The right lung has three lobes, while the left lung is divided into two lobes and a small structure called the lingula that is the equivalent of the middle lobe on the right. The major airways entering the lungs are the bronchi, which arise from the trachea. The bronchi branch into progressively smaller airways called bronchioles that end in tiny sacs known as alveoli where gas exchange occurs. The lungs and chest wall are covered with a thin layer of tissue called the pleura.

How common is lung cancer?

Lung cancer is the most common cause of death due to cancer in both men and women throughout the world. The American Cancer Society estimated that 222,520 new cases of lung cancer in the U.S. will be diagnosed and 157,300 deaths due to lung cancer would occur in 2010. According to the U.S. National Cancer Institute, approximately one out of every 14 men and women in the U.S. will be diagnosed with cancer of the lung at some point in their lifetime.

Lung cancer is predominantly a disease of the elderly; almost 70% of people diagnosed with lung cancer are over 65 years of age, while less than 3% of lung cancers occur in people under 45 years of age.

Lung cancer was not common prior to the 1930s but increased dramatically over the following decades as tobacco smoking increased. In many developing countries, the incidence of lung cancer is beginning to fall following public education about the dangers of cigarette smoking and the introduction of effective smoking-cessation programs. Nevertheless, lung cancer remains among the most common types of cancers in both men and women worldwide. 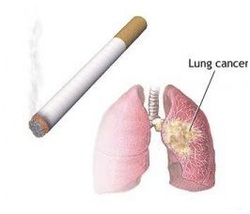 Tobacco smoke contains over 4,000 chemical compounds, many of which have been shown to be cancer-causing or carcinogenic. The two primary carcinogens in tobacco smoke are chemicals known as nitrosamines and polycyclic aromatic hydrocarbons. The risk of developing lung cancer decreases each year following smoking cessation as normal cells grow and replace damaged cells in the lung. In former smokers, the risk of developing lung cancer begins to approach that of a nonsmoker about 15 years after cessation of smoking.

Asbestos fibers are silicate fibers that can persist for a lifetime in lung tissue following exposure to asbestos. The workplace is a common source of exposure to asbestos fibers, as asbestos was widely used in the past as both thermal and acoustic insulation. Today, asbestos use is limited or banned in many countries, including the U.S. Both lung cancer and mesothelioma (cancer of the pleura of the lung as well as of the lining of the abdominal cavity called the peritoneum) are associated with exposure to asbestos. Cigarette smoking drastically increases the chance of developing an asbestos-related lung cancer in workers exposed to asbestos. Asbestos workers who do not smoke have a fivefold greater risk of developing lung cancer than nonsmokers, but asbestos workers who smoke have a risk that is fifty- to ninetyfold greater than nonsmokers.

Radon gas is a natural, chemically inert gas that is a natural decay product of uranium. Uranium decays to form products, including radon, that emit a type of ionizing radiation. Radon gas is a known cause of lung cancer, with an estimated 12% of lung-cancer deaths attributable to radon gas, or about 20,000 lung-cancer-related deaths annually in the U.S., making radon the second leading cause of lung cancer in the U.S. As with asbestos exposure, concomitant smoking greatly increases the risk of lung cancer with radon exposure. Radon gas can travel up through soil and enter homes through gaps in the foundation, pipes, drains, or other openings. The U.S. Environmental Protection Agency estimates that one out of every 15 homes in the U.S. contains dangerous levels of radon gas. Radon gas is invisible and odorless, but it can be detected with simple test kits.

While the majority of lung cancers are associated with tobacco smoking, the fact that not all smokers eventually develop lung cancer suggests that other factors, such as individual genetic susceptibility, may play a role in the causation of lung cancer. Numerous studies have shown that lung cancer is more likely to occur in both smoking and nonsmoking relatives of those who have had lung cancer than in the general population. Recently, the largest genetic study of lung cancer ever conducted, involving over 10,000 people from 18 countries and led by the International Agency for Research on Cancer (IARC), identified a small region in the genome (DNA) that contains genes that appear to confer an increased susceptibility to lung cancer in smokers. The specific genes, located the q arm of chromosome 15, code for proteins that interact with nicotine and other tobacco toxins (nicotinic acetylcholine receptor genes).

The presence of certain diseases of the lung, notably chronic obstructive pulmonary disease (COPD), is associated with an increased risk (four- to sixfold the risk of a nonsmoker) for the development of lung cancer even after the effects of concomitant cigarette smoking are excluded.

Prior history of lung cancer

Air pollution from vehicles, industry, and power plants can raise the likelihood of developing lung cancer in exposed individuals. Up to 1% of lung cancer deaths are attributable to breathing polluted air, and experts believe that prolonged exposure to highly polluted air can carry a risk for the development of lung cancer similar to that of passive smoking.