Bronchiectasis Sicca : A Hidden Cause of  Hemoptysis

A 26 year old army man presented to our hospital with complaints of breathlessness mostly on exertion , dry cough and episodes of hemoptysis on military and playing bigul in military band for past 18 months.  His primary care physician had treated him with antibiotics for bronchitis six times over the previous 18 months. he had no heartburn, acid reflux, choking, or sinus symptoms. There was no systemic inflammatory disease, history of tuberculosis, or other chest infections, such as whooping cough. he had no family history of lung disease. A  digital chest radiograph was labelled  normal from outside but on careful observation bilateral lower lobe infiltration was observed then HRCT was advised  while   high resolution chest computed tomography (HRCT) scan showed early bronchiectatic changes in both lungs, mostly cystic and varicose type . Blood tests, including antibody (immunoglobulin) levels, were normal. Pulmonary function testing demonstrated a decrease in lung capacity with mild airflow obstruction.
Bronchiectasis was diagnosed, and the patient began on a treatment program that included a bronchodilator, chest physiotherapy, antibiotics, and modified exercise program with advise to avoid playing bigul which is trumpet kind of instrument requiring excessive blowing of air  ie traumatic to lungs. Over the next 3 months, his symptoms improved dramatically, although they did not resolve completely. he regained his energy and was able to resume his normal lifestyle that included normal training, , while continuing with his pulmonary treatment program.

The diagnosis of bronchiectasis is frequently delayed for months or years, often with symptoms misdiagnosed as bronchitis, asthma, or recurrent pneumonia. Symptoms are often downplayed by both the patient and physician. Once diagnosed, bronchiectasis requires a health maintenance program with intermittent treatment of airway infections. This program is usually tailored to the patient’s symptoms and can range from occasional follow-up to frequent hospitalizations for intensive treatment. Chest radiographs or CT scans allow visualization of the dilated bronchi and can also diagnose pneumonia, which is a recognized complication.

ASTHMA AND OSA : IDENTIFYING AND TREATING ONE, MAY HELP OTHER 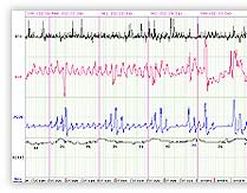 Asthma is an inflammatory disease of the lower respiratory tract, manifesting as intermittent constriction of the bronchial airways. Obstructive sleep apnea (OSA), on the other hand is defined as the presence of at least five obstructive events per hour with associated daytime sleepiness. Multiple putative pathways for OSA aggravation of asthma exist. There is a high OSA risk in not well controlled asthma.

A 53yr old obese, hypertensive and a known asthmatic presented to us with breathlessness. He had history of repeated hospital admissions , frequent night time arousals, excessive day time sleepiness and was a loud snorer. He had progressive worsening of symptoms inspite of appropriate treatment. On a high clinical suspicion of OSA, sleep study was performed. He had AHI(Apnea hypoapnea index )of 31.4/hr. Thus a diagnosis of severe OSA with asthma was made. Patient was started on CPAP. He showed dramatic improvement and is on regular follow up.

DISCUSSION
Obstructive sleep apnea (OSA) and asthma are detrimental to each other with OSA being an independent risk factor for asthma. CPAP treatment of PSG-diagnosed OSA in patients with asthma has shown improved asthma outcomes hence

Practitioners should be vigilant of OSA symptoms in unstable, poorly controlled asthmatic patients, especially when obesity is present. 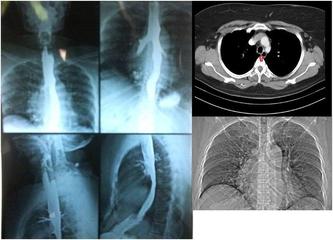 INTRODUCTION- Acquired tracheoesophageal fistula is a rare entity and occurs as a result of trauma, granulomatous infection, any previous surgery of trachea and oesophagous, corrosive fluid ingestion. About 50 percent of acquired fistulas between the trachea and esophagus are due to malignancy in the mediastinum. All the rest are secondary to infectious processes or trauma. Symptoms include uncontrolled coughing after swallowing, often worse with carbonated drinks. The majority of acquired fistulas occur at cervico-thoracic junction.

CASE REPORT -We report a case of 55 year old Indian female who presented to us with cough and regurgitation particularly after intake of liquids of two months duration along with post nasal drip and generalized body aches of one month duration. There was no history of tuberculosis or malignancy. Patient was on antihypertensive agent for four months. The prescription did not include ACE inhibitors. All routine blood investigations and chest xray were normal.

Sputum examination was negative for acid fast bacilli and Gram staining. Patient was managed symptomatically on lines of Gastro Esophageal Reflux Disease (GERD) but there was no improvement. CECT chest showed consolidative changes which were not significant. Nothing significant found in upper GI endoscopy. Barium swallow revealed the passing of contrast into trachea and in bronchi, showing the presence of tiny fistula between trachea and esophagus at level of C3-C4 vertebral level which was missed on CT chest and upper GI endoscopy.
Barium swallow showing the passing of dye from esophagus to bronchi and section of chest on CT showing tiny communication between trachea and esophagusDue to higher position of fistula, patient was advised to undergo surgery since stent placement was not possible.

DISCUSSION- An acquired tracheoesophageal fistula bypasses the laryngeal protection and leads to repeated aspiration. We are reporting a unique case of acquired tracheoesophageal fistula possibly of infective etiology which is a rare occrence at such a age. It was also the cause of chronic episodic cough in this patient which was not relieved with various treatments. All other common causes of such symptomatology at this age were also ruled out. Over the last three decades the aetiology of acquired TOF has changed. Iatrogenic, malignant and traumatic causes have now superseded infection, formerly the predominant aetiology of acquired TOF. Barium swallow will demonstrate the defect in 70% of lesions. On Endoscopy small TOFs may be missed in the folds of the oesophagus. The principles of management of an acquired TOF are to minimize further aspiration, prevent and treat pulmonary infections. Definitive Management involves stenting or surgical repair with treatment of underlying cause. 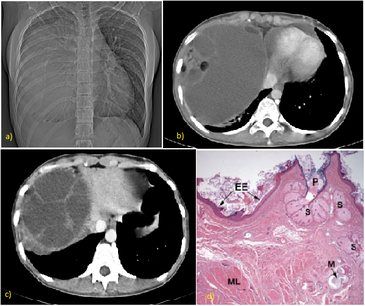 A 17-year-old girl with no complaints or co-morbid conditions presented to our hospital with trivial breathlessness. A chest X-ray revealed right sided homogenous opacity with regular margins widening the cardiac shadow. She was healthy and had good functional capacity. She denied fever, weight loss, previous disease, or any neoplasm history in his family. There was no previous chest X-ray. Her physical examination revealed that he was apyrexial, normotensive, and eupneic. Her thyroid, lymph node, chest, abdominal, and pervaginal examinations were normal. A 12-lead electrocardiogram demonstrated sinus bradycardia. Her chest X-ray(a) showed a mass in the right side of 18 x 11 cm  well-delineated margin continuous to cardiac shadow. The clinical suspicion was a pericardial or bronchogenic cyst or massive loculated effusion. Radiologically suspicion of same was made.

A case of recurrent pleural effusion with adenocarcinoma lung

A 65 yrs old female presented to us with complaint of chest pain since 6 months. Chest radiograph and clinical findings were suggestive of right sided pleural effusion.

Patient was already on ATT on basis of biochemistry/cytology reports of the pleural fluid for past 1.5 months but with no improvement. Pleural aspiration done 3 to 4 times which was negative for malignant cells and there was repeated filling.

CT guided FNAC revealed large number of epithelial cells with features suggestive of malignancy with no keratin production. Diagnosis of adenocarcinoma lung made and patient started with chemotherapy and is on follow up.

A Case of Sarcoma thigh with metastasis to lung

A 28 yrs old male presented to us with complaint of right sided chest pain, fever and cough with expectoration for past two months. He was a non smoker and occasional alcohol drinker.

Chest radiograph(a) showed a homogenous opacity on right side with clinical features suggestive of pleural effusion.

Pleural aspiration done 300 ml reddish coloured fluid aspirated which was lymphocytic and exudative in nature. Malignant cells were absent in the fluid.

Patient was already a known case of sarcoma of left thigh and had undergone surgery and after that took radiotherapy two yrs back.

CT guided FNAC done and conformed it to be a metastasis.

To conclude Low grade fibromyxoid sarcoma is a bland soft tissue tumor histologically. The tumor has aggressive behavior in that a complete excision does not necessarily prevent the development of local recurrence or distant metastasis many years later. Among the 27 cases reviewed, 16 showed local recurrences and 9 had lung metastases. The interval to local recurrence varied from 2 to 13 years (median, 4years). The interval to the lung metastasis ranged from zero (metastases at presentation) to 45 years (median,5 years). It was believed that a minimum 5 year follow-up will be needed to discuss the results of this tumor.

A Case of Wegner’s Granulomatosis Misdiagnosed as Disseminated Tuberculosis 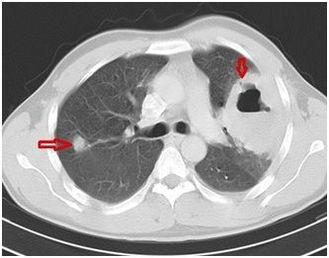 Wegner’s granulomatosis is a disease of unknown etiology, which usually present as a triad of airway necrotising granulomas, systemic vasculitis and focal necrotising granulomatosis. We report a case of 36 years old male who presented to us with a history of fever and cough with expectoration of one month duration and worsening of chest xray despite one month of antitubercular therapy which was started on direct microscopy report which was scanty positive for AFB. There was also history of pain and swelling of right knee joint for which he took ATT for tubercular arthritis five years back. Patient also complained of rhinorrhea. He was a non smoker. Routine blood investigations were normal. Urine microscopy showed presence of 10-15 RBC’s/hpf with traces of protein. RA factor was negative. CECT Chest showed a cavitating lesion with thick irregular walls and air fluid levels in left upper lobe and a nodular lesion in posterior segment of right upper lobe. CT PNS suggested pansinusitis. CT guided aspiration from the cavity yielded pus which on cytology showed necrotizing granulomatous pathology. Serum cANCA was strongly positive which confirmed the diagnosis of Wegner’s granulomatosis. Patient was started on cyclophosphamide and prednisolone and is on follow up.

False positivity of direct microscopy for AFB detection is high in the periphery to attain desirable targets by RNTCP of tuberculosis diagnosis. In Wegner’s granulomatosis therapeutic response to immunosuppressive agents combined with steroids is good. Long term follow up is essential to detect possible relapse suggested by rising cANCA levels.